Archive for the ‘My Favs’ Category

“Pressure Drop” with Keith Richards and Toots & The Maytals

My Favs: The Dude Speaks, Man

My favorite quotes from ‘The Big Lebowski’

(in no particular order)

1)   The Dude:  Let me explain something to you. Um, I am not Mr. Lebowski. You’re Mr. Lebowski. I’m the Dude. So that’s what you call me. You know, that or uh, His Dudeness, or uh, Duder, or El Duderino if you’re not into the whole brevity thing.

3)  The Dude:  This is a very complicated case, Maude. You know, a lotta ins, lotta outs, lotta what-have-you’s. And, uh, lotta strands to keep in my head, man. Lotta strands in old Duder’s head. Luckily I’m adhering to a pretty strict, uh, drug regimen to keep my mind limber.

The Dude: [after a pause] I’m sorry, I wasn’t listening.

5)  The Big Lebowski: Are you employed sir?

The Big Lebowski: You don’t go out looking for a job dressed like that? On a weekday?

The Dude: Is this a… what day is this?

7)  The Dude:  What I’m blathering about – new shit has come to light, man. She owes money all over town, including to known pornographers, and that’s cool… that’s cool, and of course they’re going to say that they didn’t get the money, because… she wants more, man! She’s got to feed the monkey.

8) The Dude:  Oh, the usual. I bowl. Drive around. The occasional acid flashback.

9) Mr. Lebowski: I cannot solve your problems, sir,only you can.

10) Maude: My art has been commended as being strongly vaginal, which bothers some men. The word itself makes some men uncomfortable. Vagina.

11) The Dude: We dropped off the damn money.

The Dude: The royal we. You know, the editorial.

12) Walter:  Nihilists. Fuck me. I mean, say what you want about the tenets of national Socialism, Dude. At least it’s an ethos. And also, let’s not forget let’s not forget, Dude that keeping wildlife, um, an amphibious rodent for, um, you know, domestic… within the city…that ain’t legal either.

The Dude: What are you, a fucking park ranger now?

The Dude: Who gives a shit about the fucking marmot?

Walter: We are sympathizing here, Dude.

The Dude: Fuck sympathy. I don’t need your fucking sympathy, man. I need my fucking Johnson.

Donnie: What do you need that for, Dude?

13) The Dude: You know, Walter, you’re right.There is an unspoken message here. It’s fuck you!

Maude: It increases the chances of conception.

The Dude spits his drink out.

15) The Dude to Walter: You fucking asshole! Everything’s a fucking travesty with you, man.

16) The Stranger: How have things been going?

The Dude: Oh, you know, strikes and gutters, ups and downs.

17)  The Stranger:  ‘Course I ain’t never been to London, and I ain’t never seen France. And I ain’t never seen no queen in her damned undies, as the feller says. But I’ll tell you what – after seeing Los Angeles, and this here story I’m about to unfold, well, I guess I seen somethin’ every bit as stupefyin’ as you’d seen in any of them other places. And in English, too. So I can die with a smile on my face, without feelin’ like the good Lord gypped me.

Wheat Fields with Reaper at Sunrise

This painting is not only a visual representation of a wheatfield, it’s also a physical depiction. I feel the heat from the summer sun beating down on a dying landscape. I see the blasts of hot wind whipping the wheat heads around in circles. I feel the man’s clothes sticking to my own skin as he works.

I’m glad I have air conditioning. 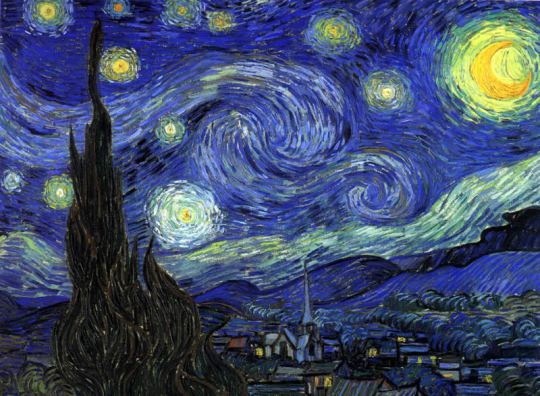 The sky is alive in this painting. Stars shining, moon glowing, and, whether it’s the Milky Way or the wind, I see space moving across the Earth at night.

This is the sky I saw each night as a child. I miss it.